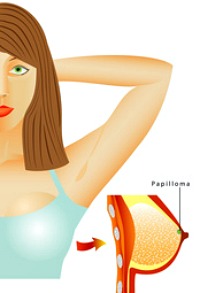 Breast papilloma is a benign growth inside a milk duct. In many cases several papillomas are grouped together.

Duct papilloma causes a clear or bloody discharge from the nipple. It is usually accompanied by breast pain.

Duct papillomas are mostly found in women older than 35. So if you are breastfeeding and are under 35, chances are something else is causing bleeding and breast pain.

Several other conditions may have similar symptoms. Check them out before thinking of a breast papilloma:

If bleeding and pain persist, do a breast self-exam. Papillomas usually grow in the duct area close to the nipple. Multiple papillomas form a small lump that is easy to feel under the nipple or areola.

Single papilloma can’t be felt. If bleeding and pain persist, but you can’t feel anything, talk to your OBGYN.

Multiple papillomas grouped together may block the duct. In this case bleeding and pain are accompanied by symptoms of a clogged milk duct.

Multiple papillomas and the ones with abnormal (still not cancerous) cells slightly increase the risk of breast cancer.

Papillomas are usually removed by means of biopsy or surgery. Affected duct may also need to be removed.

Important: With a vast array of conditions that cause similar symptoms, it is best to see a doctor upon the occurrence of any of them.

Is It Safe to Breastfeed?

Papilloma removal doesn’t jeopardize breastfeeding. Even if the affected duct is removed, you can still exclusively breastfeed and have a good milk supply.