4 Most Popular Myths of Breastfeeding and Alcohol Consumption

Breastfeeding and alcohol consumption have always been widely discussed. 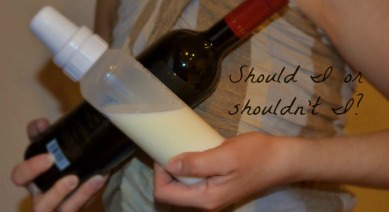 Below I list the most widely-spread myths about alcohol and breastfeeding and facts putting them all straight:

1. Alcohol doesn’t get absorbed into the breast milk – Wrong

Moderate drinking is definitely safer than drinking a lot on a regular basis. But there is no safe amount that is guaranteed not to have any short- or long-term effects on baby’s health.

In fact, American Academy of Pediatrics recommends nursing mothers to avoid alcohol consumption. Drugs and alcohol while breastfeeding “…can affect the content of breastmilk and be harmful to the baby… ”. Visit Food Avoidance section to read more about foods to stay away from while breastfeeding.

There is no unanimous decision about the degree of alcohol effect on babies. Some studies show that it negatively affects baby’s gentle nervous system.  Some prove the effect that alcohol has on human brain development.

Some show some degree of motor-developmental delay. No official report has been issued about breastfeeding and alcohol, but if you are like me - err on the side of caution and eat and drink only what's beneficial for you and your baby. Visit Breastfeeding Diet section to read more.

Personal health situation, predisposition and genetically-conditioned problems may make alcohol effect on baby’s future life irreversible and regrettable. That’s why the safest alcohol amount while breastfeeding is none, same as during pregnancy.

It is often believed that some alcoholic beverages, beer and grape wine in particular, can improve milk production. In fact, it has not been officially backed up by any knowledge of a physiological process in the body that works best when blood alcohol level increases.

What has been backed up by research is that alcohol slows down milk let-down. This may lead to baby’s fussiness at the breast, underfeeding, malnutrition, dehydration and weight loss, since breast milk is baby’s only food and drink. Such babies want to be nursed more often and stay longer at the breast, which may also cause sore and cracked nipples.

Some babies do sleep better under the influence of alcohol in mother’s milk, just as an adult would. Some become restless and can’t sleep as long. This is especially true if mom’s milk production is down and the baby is frequently woken up by hunger.

If you absolutely must drink, do it right after the feeding to allow enough time for the alcohol to clear your blood and milk before the next feeding. This, of course, depends on the amount of alcohol consumed, but generally an interval of 2-3 hours between feedings should do it. If your baby gets hungry during that time, supplement with previously pumped milk. If your breasts become uncomfortably engorged in the meantime, pump and dump your milk. This is the best way to minimize the effect of alcohol on the baby.

Important: Keep in mind that some medications contain alcohol. Let your doctor know that you are breastfeeding and ask for breastfeeding-friendly prescriptions.

How to combine breastfeeding and alcohol consumption is a painful decision to make, and I know how long you waited through your pregnancy to be able to finally relax and have a glass of wine. I don’t mean to ruin it for you – if anyone, you deserve it. If you can't wait any longer, consider the risks listed above and do what you think is best for you and your baby.