Breastfeeding twins doubles the time and effort you have to put in, but it also doubles the reward you get out. 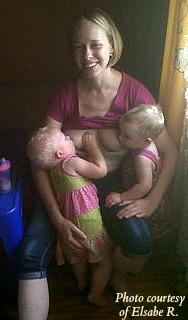 Elsabe’s take on breastfeeding twins is that it is hard, but doable. She encourages new twin moms to push through early stages of breastfeeding with determination and perseverance not to miss out on the fun part later.

Elsabe’s twin-girls were born at 35 weeks and 1 day. Long before the delivery Elsabe made the decision about nursing her twins.

She was fortunate to have the support of her family, but many doctors and nurses kept on convincing her that she would fail. It just turns out so that professional medical or best-meaning relatives’ advice is not always what mom’s inner voice tells her.

Elsabe doesn’t regret a bit of her decision about breastfeeding twins, and even now with 33-months old toddlers she enjoys the beauty of extended breastfeeding.

Here is the next set of questions about breastfeeding twins that she has kindly answered. Thank you Elsabe for sharing your experience with Breastfeeding Quest moms!

1. Did you consider bottle-feeding your baby-girls?

I was so passionate about breastfeeding, having learned more about it after nursing my son and discovering how amazing breast milk and the act of breastfeeding itself were, that bottle-feeding, to me, was never an option.

I was also just plain stubborn and absolutely determined to prove to everyone that it is possible to exclusively breastfeed two babies at once without supplementing, just because people said I couldn't (and doctors and nurses mostly!). In the end, that might have been the one thing that kept me persevering.

2. What was the first week of breastfeeding twins like?

It was quite a big learning curve and completely different from feeding just one baby.

Learning how to position two babies, so they could feed at the same time was the biggest challenge. It's in reality a skill you learn (like learning to tie shoe laces, or riding a bike etc). It was easy when Hubby or someone else was around to pass them to me and even help position them right. But doing it alone was difficult.

3. Were both your babies successfully latching on and nursing from the very beginning?

No, only Alizah (the bigger baby) fed like a pro from the start.

My smaller baby Tammy struggled to latch and nurse. They said it was because she was so small and her blood sugar level dropped quickly.

For the first night they kept her in the nursery and fed her through a nasogastric tube (a tube that carries food to stomach through the nose).

I only remember expressing colostrum once for her; they probably gave her formula for the other feeds. But that night I felt overwhelmed after seeing the two babies on the table being checked after the c-section. Having only Alizah with me that night felt familiar. She looked a lot like her brother did, latched on and fed easily like he did, so I just focused on bonding with her first.

The next morning though I realized I actually had two babies, and being so determined to make a success of breastfeeding them both, I knew I had to get her back and try again sooner rather than later. So I started asking every single person entering my room to bring her to me.

Eventually a lovely lactation consultant came to me and after hearing that my son breastfed for 17 months and seeing how well Alizah fed, she did extra effort to help me get Tammy to breastfeed as well.

It took us the entire day and I was really sore and exhausted afterwards!! After a c-section you're supposed to move around as soon as possible. I sat all day feeding Alizah, then trying to get Tammy to latch, then eating a bit myself, changing nappies, then repeating it all over again.

We gave Tammy some colostrum on a spoon in between to make sure she got milk in and got her blood sugar level up. Eventually she latched and nursed (which was about 24 hours after their birth).

They were born on Tuesday at 4pm, we worked on getting Tammy to breastfeed all day Wednesday and by Thursday lunch time the doctor said we could go home. Things went much easier at home!

4. Did you feed them simultaneously from the beginning?

The first few feeds no, as Tammy didn't latch on and had the nasogastric tube. Once her tube was removed I fed them together.

But... it got more difficult as they grew bigger and heavier!

I kept trying to feed them together, as that is what every book/website and parent of twins will tell you to do - otherwise you end up feeding all day long. But eventually after all the extra sets of hands had gone and I struggled to pick up a baby with only one hand while trying to get both positioned right, I decided to just feed them one after the other.

Getting them into the routine of one feeding after the other was more manageable than adapting to two wriggling, growing babies being picked up with one hand. It was easier for me to feed one baby while comforting the other with one hand in the cot right next to the couch or even rocking the waiting baby in the car seat with my foot, then switching them.

Once they could sit without support and had good head control, I started doing feeds together, but only when the other baby cried too much. It became easier when they could support their own body weight and help position themselves a bit. But whenever I had a choice, I preferred nursing one after the other.

Every mom of twins or higher multiples figures out routines and techniques that work best for her and her babies. Yes, I do encourage you to educate yourself in breastfeeding twins basics – read, talk to other moms like Elsabe who have done it, seek help from doctors and nurses, but remember that no two twins are alike. Be flexible, don’t be scared of letting go of some control, and letting your babies show you THE way.